We Are Going to Brazil

I thought I was going to sit this one out.  I had not gone to South Africa four years ago as my daughter had been born a few months before.  Well, that and the cost, the hassle of getting around such a large country, and the security.  Certainly I missed one of the great moments in US Soccer history when Landon Donovan scored that goal in injury time against Algeria to advance us to the 2nd Round.

When I think about Brazil, those same issues come up–it’s expensive to get there–I paid $1,600 for flights.  It’s not easy to get around–I mean it’s not like South Korea or Germany where a train can get you pretty much anywhere in a few hours.  For our 2nd match, we must fly to Manaus as there are no roads to the middle of the rainforest where two large rivers come together to form the mighty Amazon. That cost?  $745 for me.  Is Brazil safe?  In a word I would have to say no, particularly with much of the population upset about how the government has spent for these games, namely stadiums have been built or improved, but the promised and needed infrastructure has not taken shape.

With all this it would have been easy to pass on this one as well.  In addition, I have seen us play each of the teams we will face in our difficult group.  I danced into the night in Suwon as we stunned Portugal and their player of the year Luis Figo in 2002.  I cursed referee Hugh Dallas and handler of balls Torsten Frings in Ulsan as the Germans eliminated us in the quarterfinals. Finally, I was pretty depressed (as well as, again, shaking my head at the referee) as I left the stadium in Nurnburg after Ghana beat us to send us home in 2006.

Despite all of this, I will be there.  A World Cup in Brazil is too big a deal to pass on.  I truly believe life is a collection of experiences and this is one I don’t want to miss.  We may go home early or we may create more wonderful memories by advancing from this stacked group.  Either way, I will be there for the boys.  And that is what it’s all about, supporting my countrymen as they play in the world’s greatest sporting event.

So, I sold a stock that I had wanted to keep and booked my flights, applied and got a visa, have had three shots (Hepatitis A, Typhoid, and Yellow Fever) and have filled a prescription for malaria pills that I will begin taking a couple days before leaving and some sort of diuretic that I hope I won’t need.  With friends, I have places to stay, for the most part.

In 2002 I wrote a book, 23 Days in Korea: An American at the World Cup.  Nothing makes me happier that having people tell me they read and enjoyed it.  There will be no book this time, but I will be documenting this journey as much as I possibly can.  I am writing it for those of you who are not making the trip.  I hope to share the tastes, the smells, the scenery, the atmosphere, the emotions; all that comes with meeting the world for her biggest party.  I do hope you will follow along with me. 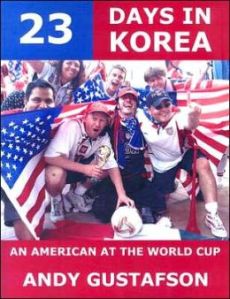